A new phenomenon has taken over the social media airwaves these last few days. Out of the blue, least expected, it’s the Old Spice Guy. I don’t watch much TV, so I missed the TV ads earlier this year where Old Spice introduced actor Isaiah Mustafa (“the man your man could smell like”). With a serious voice and a towel wrapped around his waist, the Old Spice Guy has responded to questions and comments received through Twitter, Facebook and Reddit via 30 second YouTube videos. Haven’t seen them? Entertain yourself on their branded YouTube channel (which opens with the original commercial if you haven’t seen it).

Throughout the short and intense blitz, Old Spice had uploaded over 180 videos for its campaign, which have generated over 5.9 million views and 22,500 comments. (Source: Network World). 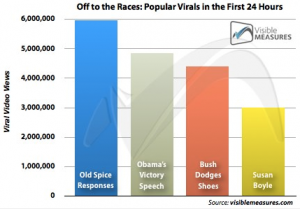 The campaign is fascinating for its viral success. This chart from Visible Measures shows it’s relative success compared with President Obama’s victory speech, the video of President Bush’s dodging of a thrown shoe, and Susan Boyle’s surprising vocal performance on TV, all major viral hits.

The secret? While Old Spice Guy responded to regular folks (Johannes S. Beals tweeted a request for a marriage proposal to his girlfriend), he also focused many of his responses to questions posed by sports stars, celebrities and major publications. For example the online tech site Gizmodo asked via Twitter, “will anything surpass the loofah as the predominant body wash-applying technology?” The response was this. And of course, Gizmodo posted the response video on its website and other channels, amplifying the views even more.

George Stephonopoulos and Justine Bateman got responses, as did Perez Hilton (669,000 views) and Ellen Degeneres (284,000 views). Alyssa Milano has enjoyed a series of flirty virtual courtings, including a delivery of flowers from the Old Spice Guy. Guy Kawasaki (Silicon Valley venture capitalist and social media maven) got a humorous reply, playing off his name:

The first key lesson here is about connecting with your audience personally. While Old Spice is only responding to a relatively small number of questions, Mustafa is speaking directly to individuals, seemingly person to person, rather than logo to consumer. There’s a big difference.

Second is knowing how to use your influencers. Isaiahs first videos responded to bloggers and journalists that had written about the Old Spice commercials. He then moved to celebrities, and chose random individuals whose questions or comments would make for great entertainment (like the marriage proposal). By responding to people (and companies) with large audiences, Old Spice is able to leverage their brands to exponentially increase their own success. And when the campaign starts to get viral, everyone wins. Gizmodo, for example, is thrilled to have gotten a video response (and a few million people may have just learned about Gizmodo for the first time), and Old Spice is thrilled Gizmodo posted is on their own site (reaching millions of their readers). It’s a win-win for all.

Third, make it fun! If people are enjoying engaging in your campaign (tweeting, sharing, talking about at Starbucks or at the gym), it will intensify. Whether you’re selling Old Spice or trying to get people to come to Jewish Trivia Night (my favorite tweet comes from @SixthandI Synagogue: “Test your knowledge to the tune of ‘Let’s get quizzical…quizzical’ I see you dancing 80’s style in your cubicle,” followed by a link to their event.

Rick Bakas gives a good overview of why this social media marketing campaign is so effective including a reminder to have fun.

ReadWriteWeb shares the inside scoop on how marketing firm Wieden Kennedy created and executed the campaign, including all night filming sessions in Portland, OR, where they averaged 7 min of production for each 30 second response.

FastCompany interviews the team that orchestrated the campaign.

And a guy from Reddit asked for the audio to create an Old Spice Guy voicemail message. He responded with many audio options to create the message. Now you can have your own. http://www.oldspicevoicemail.com . While the 2 day blitz of video responses may have ended this morning, it’s fascinating to see how others have picked up the ball and run with it.

How are you empowering and energizing your community to support your mission and goals? While the Old Spice campaign may seem leagues away from nonprofit endeavors, the lessons learned from this success surely apply. Use your influencers. Make it personal. And remember to have fun.