This past week, Facebook launched a video component to their already immensely popular photo platform, Instagram, in order to compete with Vine, the short form video app by Twitter.

Launched by Twitter, Vine is a micro-video app that allows you to record six-second videos on your phone and share them on Vine and Twitter. You can record all 6 seconds at once, or break up the six seconds to record separate images in a series or "stop motion" style. Vine then displays the videos in a loop, similar to a GIF.  (Yes, you might be thinking, 'aren't animated GIFs so 1999?'  Yes, but they are making a retro comeback, especially through Tumblr and with new tools like Vine).  In some cases the looping effect holds your attention longer, and allows for a deeper understanding of what might appear simple on the surface.  But in some cases the looping effect can be annoying.  Perhaps in the future Vine will allow it as an option.

After downloading the app, you can start and stop the video by tapping and holding the screen. When finished, you simply upload the video and can add comments and hashtags. Similar to Twitter, when tagged, a video can be seen by anyone, but you only see videos by users you follow in your feed. Vine videos can be embedded anywhere on the web and uploaded to Twitter and Facebook as well. A quick Vine tutorial is here.  Warning: it's slightly more than 6 seconds!

To compete with Twitter’s new mini-video feature, Facebook launched its own version of Vine, via Instagram.  Instagram video is not a separate app, but rather incorporated within Instagram. Users simply download the updated version of the app and a new video button appears when taking photos on your phone. This video feature can be started and stopped like Vine, but can record up to 15 seconds and allows for editing and filters, similar to Instagram photos. Unlike Vine though, Instagram video can only be uploaded via Instagram or Facebook, whereas Vine can be embedded anywhere on the web.

Instagram video also includes a cover photo (you can choose which frame of the video you want to show when it's displayed as a still image — it doesn't have to be the very first frame), and video stabilization.  These videos do not loop as Vine does.  A quick Instragram tutorial is here.  Also more than 15 seconds!

So what should I be using?

Vine does have the largest audience in terms of short video app users. But that audience is only 11% of the total video sharing market, whereas Instagram holds 35% of the photo sharing market, and has 130 million users. Despite the newness of Instagram and the fact that you're not currently able to embed those videos, its audience and relevancy eclipse Vine’s, and it offers more features.

The looping of Vine and the ability to embed the videos elsewhere online can, and will, probably be added to Instagram in the future. But since both are free, it doesn’t hurt to download both and see which one you like better.  If you're already a regular Instagram user, it may make sense to integrate your short format video work into that existing channel.  If you have not created an Instagram channel for your organization, you may find Vine more attractive since you can embed those videos elsewhere to augment other channels.

Here’s a breakdown via TechCrunch (read the whole article here): 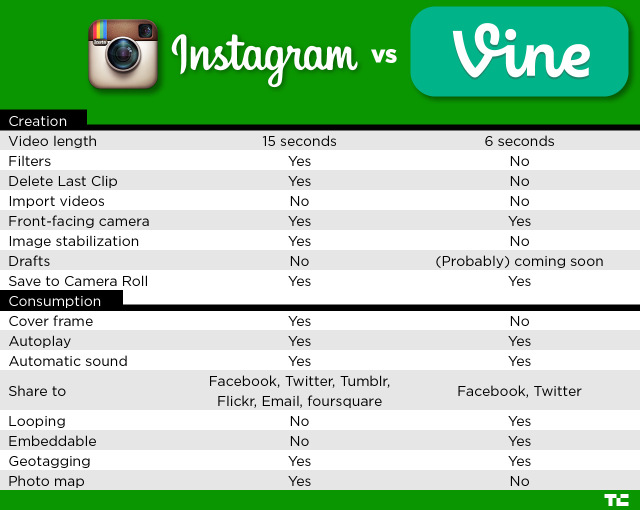