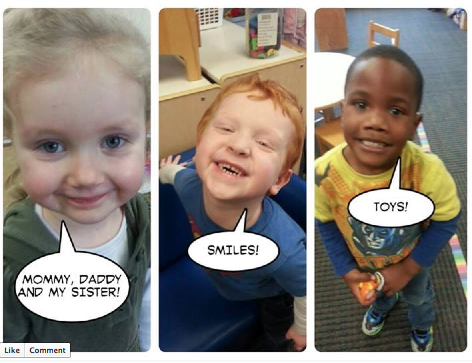 What are you thankful for this week? I'm thankful for this catchy Facebook post from Shannon Hall and her team at the Sarah & Irving Pitt Child Development Center of JCC Metro Detroit. With the discovery that the most popular posts on their page were the photo collages, and knowing that the children would be focused on giving thanks in celebration of the upcoming Thanksgiving (and Chanukah!) holidays, the team developed this creative idea. Using smart phones, the team snapped a few photos of children, noted what they were thankful for, and added the speech bubbles using the free PicSay app for Android phones. For iPhone users, the free app Bubble works great, too. 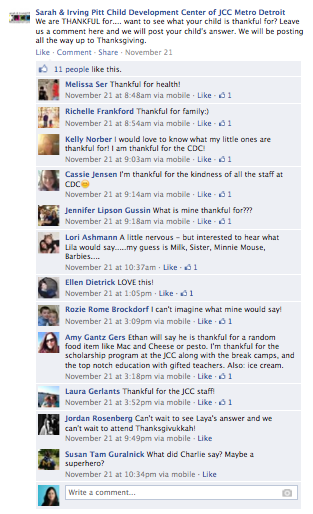 Then, in order to attract more attention then they would have by posting the photos individually, they collaged three responses into one photo using PicsArt, another free app for Android, iPhone users, check out the free and easy to use PicStitch. The result was a playful, eye catching photo.

They combined with photo with an invitation to a week long game. Comment on the post and they'd ask your child next. And comment they did! Parents responded with curiosity about what their own child might say, and also added their own grateful comments. The result is a community expression of gratitude, perfect for the week before Thanksgiving.

What was the strategy behind the team's thinking? As part of their work in this year's Jewish Early Childhood Social Media Academy organized by the Alliance for Jewish Education at the Jewish Federation of Detroit, the team wanted to celebrate the children and families within their preschool program in order get the word out to the larger community about their offerings. Their strategy is to encourage their current actively involved on Facebook parents to inspire others to join the fun. Focusing on organic, fun, and engaging posts, their Facebook page has been a model of successful early childhood engagement.

In addition to achieving this immediate goal, creating social content that gets people to comment increases your "weight" in the Facebook algorithm.  Your content is therefore more likely to show up in the newsfeeds of others who have liked the page, which leads to more engagement, which sets a very positive snowball in motion.

How are you stewarding a culture of thankfulness and engagement on your Facebook Page?