Some organizations jump into social media with great excitement. Others with great trepidation. What we know is that the rules of engagement in social media are in many ways fundamentally different than those of other communication tools we’ve used in the past.  A good social media policy provides clear guidelines as to how staff should represent themselves and the organization when posting and interacting with the community, freeing them up to think more strategically. A social media policy is also likely to help leadership feel more comfortable with the less formal nature of social media by letting them establish boundaries for its use. Often to gain comfort and confidence, we need to reduce the fear, get clear on expectations, and be on the same page with our staff, supervisors, board members, and the community.

This Workbook is designed to help you, as an organization, ask important questions about social media, and how you will manage it and use it to your advantage, thoughtfully.  The Workbook is offered as a PDF download free of charge, thanks to our sponsors, The AVI CHAI Foundation, The Union for Reform Judaism, and See3 Communications.

We are stepping through the threshold of a new age.  Connected, individually empowered, globalized, diverse and personalized.    The technologies of today are far more than digital communication tools – they are transforming society at an increasingly rapid rate, with important implications and opportunities for the Jewish community.

Synagogues in particular are in the spotlight in this moment of transformation.  When communities are self-organizing, and individuals are seeking “anytime, anywhere” involvement, the structures of synagogue business models, programs and culture are often resonating less and less with those we seek to engage.

In partnership with UJA Federation of New York, and inspired by the work of Beth Kanter, Allison Fine, June Holley and many others, Darim Online is launching an initiative to explore what it means for synagogues to function as truly networked nonprofits.  We call them Connected Congregations. Connected Congregations focus on strengthening relationships, building community, and supporting self-organizing and organic leadership.  They are flatter and more nimble, measure their effectiveness in new and more nuanced ways, allocate their resources differently, and use technology in a seamless and integrated way to support their mission and goals.

But being a weaver and knitting a healthy and vibrant community takes more than good intentions.  It means knocking down ‘fortress walls’ (in the language of The Networked Nonprofit), pivoting our culture, evolving our staffing structure, and remaking our structures of leadership.  It takes real change, and active stewardship of that change over several years. There’s a lot of research and work to come for all of us.

As we get started, we’re launching a blog carnival on Connected Congregations.  Over the next few months we’ll be handing the microphone of this blog to many smart people both from within and outside of the Jewish community, and some who straddle both worlds.  We’ll be encouraging them to share their ideas, their work, their insights and observations in order to develop a narrative and invite you into a conversation about being – and becoming – a Connected Congregation.

You can follow this series of posts on our blog by searching for #connectedcongs on our site, and following the conversation on Twitter with the hashtag #connectedcongs.   Do you have a story or insight to share?  Contact Lisa Colton if you’d like to be considered for participation in the blog carnival.

This post is part of a blog series on Connected Congregations being curated by Darim Online in partnership with UJA Federation of New York.  Through this series, we are exploring what it means for synagogues to function as truly networked nonprofits. Connected Congregations focus on strengthening relationships, building community, and supporting self-organizing and organic leadership.  They are flatter and more nimble, measure their effectiveness in new and more nuanced ways, allocate their resources differently, and use technology in a seamless and integrated way to support their mission and goals.  We hope these posts will be the launching pad for important conversations in our community. Please comment on this post, and read and comment on others in the series to share your perspective, ideas, work and questions. Thanks to UJA Federation of New York for supporting this work.

Partnership between synagogue and church lead to unprecedented gift; Two  communities facing the burden of repairing collapsed ceilings find meaning in supporting each other; Community members respond with emotion and  joy.

On the heels of winning one of only four Amex Partners in Preservation grants of $250,000 in New York City, Senior Rabbi Andy Bachman of Brooklyn’s Congregation Beth Elohim announced today that Trustees of the Congregation have pledged $15,000 to Old First Reformed Church, their beloved neighbors and partners in building friendship and community in Park Slope.

The CBE gift to Old First is in recognition of its generous and continuing support for Congregation Beth Elohim over the years. Among many other gestures, Old First made its worship space available for several High Holiday services when CBEs Sanctuary ceiling collapsed. Old First also actively supported CBEs successful campaign to win the Amex Partners in Preservation grant. In an ironic twist, Old Firsts own ceiling collapsed earlier this year. Accordingly, CBEs gift to Old First will support their efforts to complete the necessary architectural studies for the preservation work its sanctuary demands.

In his announcement of this gift, Rabbi Bachman noted, “Each of our historic and sacred communities inhabit buildings made for a different era of religious life; and yet each of our communities understand the historical mandate to renew our relationships with our God and our community in every generation. As Simon the Righteous taught us in the Talmud, the world stands on three things: on Learning, on Worship, and on acts of Loving Kindness. May Congregation Beth Elohim and Old First Church thrive in these values and continue to bring goodness, kindness and peace to our world.”

Upon hearing the news, Reverend Dr. Daniel Meeter of Old First remarked that he was shocked, “Who does this kind of thing? So this is what love looks like, this hospitality, this generosity, this joining our lives together for better for worse."

How can we each be generous in our own ways today? 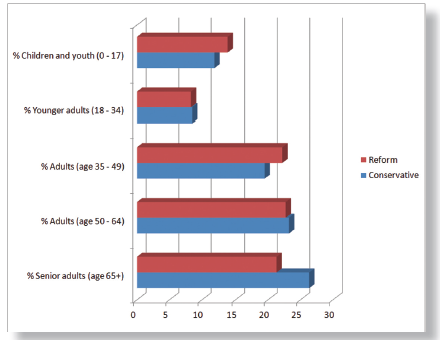 Guest post from Rabbi Aaron Spiegel. This post is part of a series on networks and network weaving.

Synagogue 3000 just released a report entitled “Reform and Conservative Congregations: Different Strengths, Different Challenges.” The report could just as easily been entitled something like “Synagogues are Fading Into Obscurity,” but that would be a little too provocative. The data is clear; the institution best positioned to provide the full richness of Jewish life is becoming irrelevant for most American Jews. More disturbing is that our research shows some 70% of young Jewish adults, those between the ages of 23 and 39, have no connection to the established Jewish community (synagogues, Federation, JCC’s, etc.). While many in the Jewish world talk about Jewish continuity and protecting the future of American Judaism, most of the proposed solutions have had little effect. The good news is we’ve also learned that this majority of young Jews are very interested in Judaism, just not the way we’re offering it.

While most in the congregational world talk about outreach, Synagogue 3000 learned that this moniker has a negative connotation. Outreach says, albeit subtly, “I’m reaching out to you so you can come to me and have what I want to offer you.” The community, particularly those young, single Jews who are our potential future are saying, “no thanks.” Instead of outreach Synagogue 3000 changed the conversation to engagement. Learning from the church world and community organizing, Synagogue 3000 created Next Dor (dor is Hebrew for generation) – an engagement program. Participating synagogues agree to dedicate a staffer, most often a rabbi, whose primary job is to meet young Jews where they are – physically, spiritually, and emotionally. These engagement workers are charged with finding young Jews, be they in bars, coffee houses, local gyms, etc., and finding ways of engaging them in conversation to create relationships. Relationships create trust, which creates other relationships, which creates opportunity for real engaging conversations about life and what Judaism has to offer. One of the key points is that this engagement and these relationships are l’shma, for their own sake. Synagogue membership is not the goal – connecting Jews to Judaism is.

While the goal is engaging young Jews in Judaism, several of the Next Dor partner synagogues are discovering tangible benefits. Next Dor D.C., a project of Temple Micah was one of the first adopters. Rabbi Danny Zemel, a proponent of this engagement model before Next Dor existed, knew that Temple Micah needed to engage this unaffiliated and disaffected population. As a Next Dor pilot synagogue, Temple Micah hired Rabbi Esther Lederman as their engagement worker. A big part of Esther’s job is having one-on-one meetings with young Jews, usually in coffee shops. Now in its fourth year, Next Dor D.C. has gone from one-on-one meetings to regular Shabbat dinners at Esther’s home to annual free High Holy Day services for young adults, led by Esther and Michelle Citrin. The results – young Jewish adults are joining Temple Micah.

Some have dubbed this approach “relational Judaism” which seems something of an oxymoron. Judaism is at its essence (at least in my opinion) all about relationships. Unfortunately, congregations have focused on other things like supporting infrastructure, b’nai mitzvah training, and programming. More than the first two, the focus on programming is the irrelevance linchpin. Rather than engaging Jews in what’s important in their lives, synagogues program based on anecdotal information. When numbers fall the default synagogue response is to seek better programming rather than forming relationships with members, finding out what’s really important in their lives, and being responsive to their needs. Interestingly enough, while Synagogue 3000 envisioned the relational approach targeting young Jewish adults, the Next Dor communities are discovering it works with everyone.

Rabbi Aaron Spiegel is the CEO of Synagogue 3000. The report was the result of Synagogue 3000’s participation in FACT (Faith Communities Today), the largest and most comprehensive surveyor of faith communities in the United States.

This post is part of a series on networks and network weaving that Darim Online is curating to advance the communal conversation about relationship focused Jewish communities.  Thanks to UJA Federation of New York for supporting our research and this blog series.  Click here to see other related posts in the series.